Rockin' All Summer Long with Many New Updates Around the Area

Simply The Best is Back! 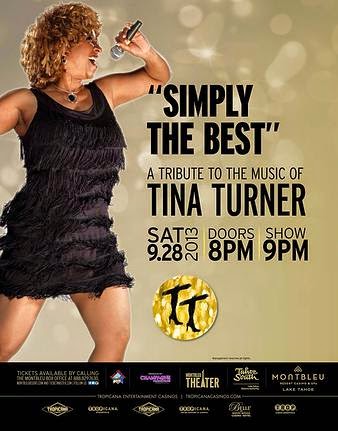 Tina Turner Tribute, "Simply The Best," is coming to Victorian Square this Thursday, July 31st! This show is a full production concert of your favorite Tina Turner songs produced by M8TRIX in association with Champagne Productions. This concert is EXPLOSIVE and filled with high energy, powerful vocals and top notch dancers.

Tina Turner, one of the world’s most popular entertainers, also know as “The Queen of Rock”. Turner has been termed the most successful female rock artist, winning eight Grammys and selling more concert tickets than any other solo performer in history. She has also been named “One of the Greatest Singers” of all time by Rolling Stone Magazine. Her combined album and single sales total approximately 100 million copies worldwide. As Turner’s retirement has removed her from the entertainment scene, many have longed for her music, and highly energetic stage presence and powerful vocals. Hence, “enter stage right”...Stephanya. Stephanya has performed in venues around the world for the last decade showcasing her soulful interpretations of some of her favorite iconic artists’ such as Aretha Franklin, Gladys Knight and Patti LaBelle and is also known for her powerful voice and dynamic stage presence. But her night after night standing ovations come when she performs a multitude of her idol’s most memorable songs such as, “Proud Mary”, “Simply The Best” and “River Deep Mountain High”. She is described as, “a songstress... Stephanya rings down the house.” by Mel Shields of the Sacramento Bee. Stephanya has now created a full concert of Turner’s songs along with songs from her “Surprise Guest”. A rue production that has not been seen since Turners’ retirement.


You don't want to miss this one!

The weekend of July 19th marked a new and exciting update for the Male Room as the MaleMen had their grand opening at their new home venue, Opal Ultra lounge. Feel free to check out the pictures as we invite you to come enjoy the action every Saturday night. Doors open at 7pm and show at 8pm. Please feel free to contact Travis via email at travis@cptahoe.com for more information regarding planning to come and see the show during
your next visit to Tahoe. These last couple of weeks in the new venue have been PACKED FULL and SOLD OUT so be sure to reverse your seats early in advance. Feel free to check out a few images of the Male Room - Opal opening by clicking the link below the presented image.

Hard Rock Hotel and Casino IS COMING TO TAHOE!

Another event during July 17th-20th took place that is going to revolutionize South Lake Tahoe as we know it and in all the right ways. The Hard Rock hotel and casino announced at its press release Thursday (July 17th) morning that it was going to be taking over the old Horizon hotel and revamping it as the Hard Rock Lake Tahoe! At this press release our very own Heavenly Angels/Champagne Productions promo girls got to represent Hard Rock hotel as "Hard Rock girls" serving all of those who attended the release. After the big announcement at the press release, our lovely promo girls continued to promote the new Hard Rock hotel at the tent inside Edgewood golf course throughout the celebrity golf tournament weekend. At the tent our promo models handed out swag as they got members of the community and visitors to sign up for the new hotel's mailing list and also took many MANY pictures with guest which you can check out on the Hard Rock Lake Tahoe website, Hard Rock Lake Tahoe Facebook, as well as on Instagram by looking up the hashtag: #rocktahoe. You can also see a few of
the pictures by clicking the link below the presented image. We
were very excited and happy to be a part of these promo events and are extremely excited for the new hotel to open up and see how it revolutionizes South Lake.

Boogie Nights is Back in Blu

Saturday, July 19th also marked the grand opening of Boogie Nights! Returning from last year, take a trip back to the 70s/80s at Boogie Nights inside Club Blu and join the fun with Mr. Boogie, the roller girls, and the Boogie Babes every Friday and Saturday night at 9pm.